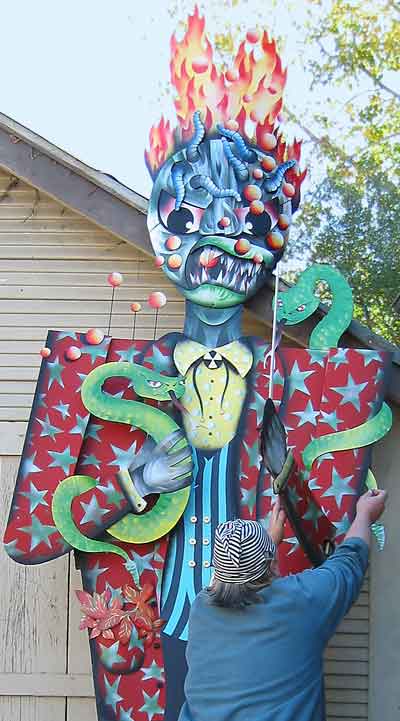 Cardboard Mural for Rio Theatre Entrance and Lobby
In honor of the October showing of the newly restored classic film Metropolis, and in collaboration with the Rio Theatre and New Music Works, local artists Dag Weiser and Leslie Murray have designed and created a 21 foot long by 8 foot tall cardboard cityscape mural for the lobby of the theatre, as well as a facade for the entrance.

Dag was presented with a Santa Cruz Cultural Council Gail Rich Award for "...select individuals who inspire our...community." See the article and picture in the Sunday papers. He made his acceptance speech at Kuumbwa Jazz Center on January 28th. It is an honor to be among such a great group of present and past awardees.

January 31st is the opening of the Santa Cruz Museum of Art & History's huge county-wide Collage + Construction + Assemblage exhibition. Dag's installation is in the Museum's first floor Lezin Gallery, along with a massive three-story hanging cardboard art piece in the main stairwell. A lot of excellent art in this thing! Front at Cooper Street, downtown Santa Cruz, through April 2009, Tues-Sun 11-5, first Fridays till 9, admission is free.

Look for Dag in the Friday, January 30, 2009 Santa Cruz Sentinel

ONE NIGHT ONLY -- Annual Halloween outdoor yard-art installation and kids' trick-or-treat. We got soaked! And the art did too. 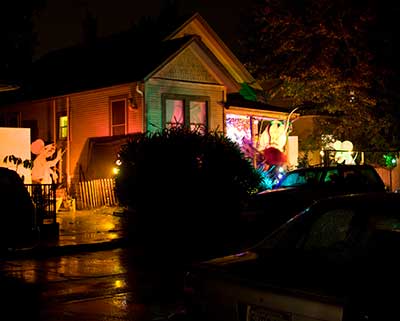 Dag is mentioned in the local paper today, "Artist Dag Weiser continues to be the dominant vision of the outside of the Rio with his colorful, pop culture-oriented cardboard tableaus."

Met The Residents! The Residents are in town to kick off of their Bunny Boy Tour and Dag helped them out with some cardboard additions to their set -- Dag created the triangular spikes attached around the edges along with some extra bunnies. The whole thing toured the US and Europe this Fall.

It's a Cardboard Art-stravaganza at the Rio Theatre! Dag's large anamorphic faces are all on display. See them change as you move past but watch out for traffic!! Soquel Ave. at Seabright in Santa Cruz.

Dag has had an entry in WikiSCUM for some time. Recently, the same guy who famously said, "I don't think people can eat and look at your art at the same time," has uploaded a number of punk rock posters including some of Dag's. (Scroll down that page and try to figure it out, there are at least 5 or 6. Hints: Schematix, intricate ink drawings.)